Pretty quickly these kind of comments turn into a negative snowball effect or cascading bias. This became the common perception of this particular run of my game. It could be that my game was just poorly run or poorly designed, but ask any megagame facilitator and they will tell you that some of these problems are inevitable. If you are designing your own megagame and have not tested it at scale, or even if you have run as many megagames as I have, then try to remember some of the principles I have identified in writing this report. In the week following up with my megagame I was able to communicate with and appreciate the feedback from some of the disappointed players.

Of all the 80 players that paid fifty dollars to play the game, three took up the offer to get a full refund. One of them left angrily during the game and emailed me asking for the refund without giving me helpful feedback. I responded with a thank you and returned his money as promised without mentioning how unhelpful his feedback was.

He then responded more graciously, apologized, and finally gave me a detailed report in his second email. He as well as others gave me invaluable feedback and I feel that they might even give me or other megagames a second chance due to a sincere effort to learn from mistakes made. In previous games where I had enough control players, I and other control players were able to coach players who had become disengaged or were getting outplayed by their enemies into a really gratifying turn of play.

Strong players like the challenge, disengaged players want to know how to move forward, and Control Players love making the game fun and balanced, especially when they can do so without much direct manipulation or coercion. The key here is you want to catch issues as soon as possible, ideally in this order.

You want to design the game so that players will be immersed in the game, not talking about the problems playing the game. After you or the designer inevitable fail to some degree on this front. Give a speech, email, or player handbook instructions to explain how a megagame cannot be as well tested as a typical board game, not as immersive as a well run LARP, and not as accommodating as a small group Tabletop RPG. You want your Control Players to be able to identify players who need help. Lastly you as the facilitator want to follow up with players with an humble and thankful attitude.

On top of these considerations megagames also often have some interplay between different minigames or systems that apply only to certain roles in the game. Are players kept blind to these effects on the rest of the game or should they be informed about them so they can consider them when making their critical choices about which actions to take within their own minigame?

How important is it that each Control Player know the other systems outside of their control? What is the context? Why does any of this matter? How do others relate to my role in the game? What ideology does my role represent? Players must know that a choice is being presented to them. If they are kept blind to parts of the game but still affected by those parts then it creates a nice shroud of mystery. This is a serious problem in Megagames.

I would say the most overpowering advantage any team can easily gain over others is preparing a unique shirt, hat, color, or thematic costuming of any kind for their entire team to wear.

Lessons learned from mistakes made (Part 2)

Color coded articles of clothing of any kind would help. Tables covered in flags are a great visual identifier for which team is supposed to be where. The only real issue here is that these props are expensive and may be burdensome to travel with in large quantities. At the very least you need to be able to identify Control Players from across the room.

My ultimate fear in writing all of this is that new megagame designers or potential facilitators will be afraid to run a game for fear that they will do it badly. Fear not! The first megagame I facilitated was far worse than the second and the third, but regardless of how it might be compared to other megagames it was a truly novel and exciting experience for everyone involved. The problems we had with the game immediately piqued our interest in designing our own game.

It is rare to meet every expectation of every participant, especially once you have more than twenty people involved. But if you can exceed the expectations of the majority of your participants, which a megagame is likely to do since the experience is so much more than the sum of its parts, then you should consider it a success.

It is because they are so dynamic that so many unique problems can be identified afterwards.

Each of those identifiable problems is nothing more than an opportunity to improve upon the experience. I have tried to walk away from this hobby but I keep getting pulled back in because of all the potential I see here. I hope that the community continues to grow and that designers continue to experiment.

Nicholas W. Thanks to Shaun for writing this two-part blog post! If you would like to write a blog post for Megagame Assembly, either from a player or designer point of view, please get in touch! Cart 0. What is a megagame? Lessons learned from mistakes made Part 2 This is the second part of a 2-part blog post.

... And Put Those Lessons Into Practice

Control Player Problems For anyone who is unfamiliar with playing megagames, they typically have a team of volunteers who learn the game beforehand and agree to referee the game for the players called the Control Players. Have a Morale Control Player All Control Players tend to misunderstand or misinterpret at least some of the rules, just like all human beings. Negative Perceptions can Be Changed In the week following up with my megagame I was able to communicate with and appreciate the feedback from some of the disappointed players. What Players Want to Know Vs What Players Need to Know On top of these considerations megagames also often have some interplay between different minigames or systems that apply only to certain roles in the game.

Who am I in the game? 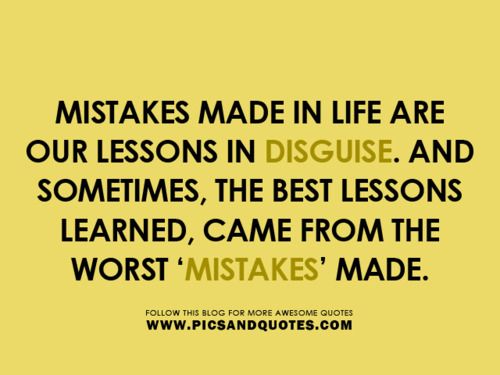 What must I do in the game? Even a Badly Run Megagame is More Fun Than Not Doing One At All My ultimate fear in writing all of this is that new megagame designers or potential facilitators will be afraid to run a game for fear that they will do it badly. Further Reading Nicholas W. All men make mistakes, but only wise men learn from their mistakes. Winston Churchill.

There are no mistakes. The events we bring upon ourselves, no matter how unpleasant, are necessary in order to learn what we need to learn; whatever steps we take, they're necessary to reach the places we've chosen to go. Richard Bach.

Beginner Mistakes That Are Slowing Down Your Piano Progress

Mistakes are a part of being human. Appreciate your 'mistakes' for what they are: precious life lessons that can only be learned the hard way. Unless it's a fatal mistake, which, at least, others can learn from. AI Franken.